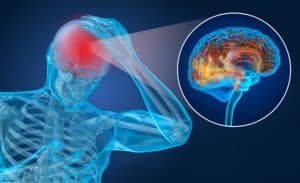 When most people think of concussions, they think of football or falls. They may think of acts of violence like a mugging or an assault, but they don’t always think about domestic violence. Based on recent studies and data, though, we should be connecting family violence to concussions.

According to data compiled from domestic violence agencies in Ohio, “over 80 percent of survivors accessing services have experienced some type of abuse that could lead to concussion or another type of brain injury. They’ve been punched in the head. Thrown against an object. Hit in the skull with something hard.” In short, intimate partner violence (IPV) is a leading cause of concussions.

It is also likely that the symptoms of a concussion are likely to be misdiagnosed or ignored by law enforcement who initially meet with the victims. Concussion symptoms can be incorrectly viewed as Survivors are often deemed “erratic” or “emotional,” or immediately questions about their alleged substance use (or abuse) and mental health issues. From the New York Times:

few [researchers of concussions] connected the experiences of women who endured similar or even higher levels of bodily violence to traumatic brain injuries — not even in the shelters to which they fled. “People might think, Someone smacked her in the head or pushed her, no big deal,” says Eve M. Valera, an associate professor of psychiatry at Harvard University and a leading researcher on traumatic brain injuries among survivors of domestic violence. While brain injuries among this population have never been comprehensively tracked, data suggest that the rate might be significantly higher than those incurred by athletes or soldiers…. Every year, hundreds of concussions occur in the N.F.L.; thousands occur in the military. Valera’s estimated number of annual brain injuries among survivors of domestic abuse: 1.6 million.

But unlike injuries in sports, war or accidents, domestic assaults happen almost entirely out of view. Victims themselves may not be able to process or remember what happened, and their assaults are often not reported to the police.

Subsequently, IPV victims with concussions often do not receive the medical care they require in the immediate moments following a physical assault. Their symptoms can also be used against them by their abusers who claim these women are mentally incompetent, using various controlled substances, or are simply lying.

The likelihood of experiencing multiple concussions throughout a domestic violence-laced partnership is also high. If a person sustains a second concussion while recovering from a previous concussion, they experience “second impact syndrome” which can result in severe, rapid, and potentially fatal brain swelling. Other possible concussion complications include post-traumatic headaches that last up to seven days after the incident, post-concussive syndrome that includes dizziness, headaches, and thinking difficulties lasting more than three weeks. Post-traumatic vertigo is another complication that causes dizziness and spinning sensations lasting for days.

Concussions are a form of “mild” traumatic brain injuries. A concussion occurs when an external impact causes the brain to move violently within the skull. Most of the time, these injuries will heal within a few weeks.  Concussion symptoms vary by individual and the severity of the blow to the head, but can include:

Other symptoms can include a “dazed appearance,” slurred speech, difficulty understanding others, amnesia about the event, irritability, and smell and taste issues. It is not unusual for concussion symptoms to manifest immediately after the physical trauma, though some symptoms can take hours or days to appear.

What are my options if I am a victim of domestic violence in Knoxville?

If you or your children have been the victims of family or household violence, the most important step you can take is to get to safety. If you can physically leave, do so. If you cannot, you can call the Domestic Violence Hotline at 800-799-7233, or the Knox County Family Justice Center helpline at 865-521-6336.

Next, our team can help you seek an order of protection (AKA, a restraining order specifically for family and household members) to protect you and your children. That order of protection can give you temporary custody of your children and your pets, and provide short-term child support. It can force your abuser to leave your home, and put a stop to any harassing or dangerous behavior under penalty of law. Any firearms your partner has will be removed. These initial orders last for 15 days; after that, we will prepare you for a hearing with the Judge, who will determine whether or not to put a permanent (or “extended”) order in place. This order lasts for one year, and can be renewed for up to five years.

Law enforcement may also ask you if you wish to press charges. Ultimately, the decision to pursue criminal charges is up to the State. You can discuss this with one of our Knoxville family law attorneys as well. We recommend that you do pursue charges in order to ensure that you and your children remain safe, but we can talk more about it during our consultation. Speaking with a lawyer provides the opportunity to discuss every type of abuse you have experienced, such as concussions and other head trauma, additional physical assault, verbal and psychological abuse, and sexual abuse. Any financial abuse you have endured should also be noted, such as having your money withheld or spent without your consent. All of these factors can play a role in the divorce process, and in your argument for custody of, and support for, your children.

The divorce attorneys at LaFevor & Slaughter are here to help you navigate this understandably trying time. Contact our Knoxville, TN lawyers at your earliest convenience by calling our office, or completing our contact form. All consultations are confidential.