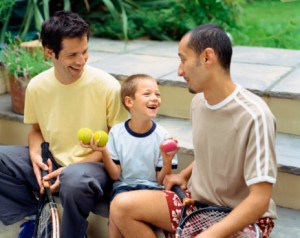 The definition of family and what it means to be a parent is evolving in this country. The United States Supreme Court ruling that made marriage equality the law of the land, unfortunately did not automatically revise all of the family law statutes throughout the country. When it comes to child custody disputes for same sex spouses who are divorcing, Tennessee’s outmoded law has come between a mother and her child.

Erica and Sabrina Witt were legally married in Washington, D.C. in 2014. Sabrina Witt gave birth to a child in 2015 who was conceived through artificial insemination using an anonymous donor, but Erica never formally adopted the child. She likely assumed that she was also the child’s parent, since she was married to the child’s mother when the child was conceived and born. Erica was planning to spend the rest of her life together with Sabrina and their baby, but later in that same year, Sabrina filed for a divorce. A dispute over custody of the child brought the couple to a custody hearing, where Fourth Circuit Court Judge Greg McMillan ruled that Erica Witt is not a legal parent of the child. She was given rights equal to that of a stepparent, which denies her the right to legal custody of the child. The judge made his ruling according to the specific language in the law, which refers to “mother” and “father” and “husband” and “wife.” According to a story on WBIR.com, a higher court must now determine whether Tennessee’s current law may be interpreted for same-sex couples, or if that is something that the legislature must address.

In August, the New York State Court of Appeals took a bold step in expanding the definition of parenthood when it ruled that a caretaker who is not related biologically to or the adoptive guardian of, a child could still be given custody and visitation. The Court ruled as it overturned the previous precedent writing that, “the definition of a ‘parent’ established by this court 25 years ago in Alison D. v. Virginia M. has become unworkable when applied to increasingly varied familial relationships.” The Court went on to explain that by presenting clear and convincing evidence of conceiving a child and raising a child together the non-biological, nonadoptive parent does have standing to seek custody and visitation. The court ruled that “Alison D’s foundational premises of heterosexual parenting and non-recognition of same-sex couples is unsustainable,” as reported by the New York Times.

The change in the New York law is in line with similar laws across the country that recognize de facto parents, whose value and contribution to a child’s life is not to be disregarded simply because of the lack of a biological or legal connection.

At LaFevor & Slaughter, we protect our clients’ rights in a child custody dispute. We invite you to call us at 865-637-6258 or fill out our contact form to schedule a consultation to discuss your custody case and get your questions answered today with an experienced Knoxville divorce attorney today.

For more than 38 years, our established law office has earned a positive reputation for professional representation for those in need of family law and estate planning services.